Stitches, a memoir by David Small: A Must-Read 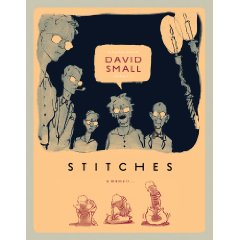 Is it possible that some people are simply incapable of loving their own children? David Small’s incredible new memoir, Stitches will have you asking that question and leave you shaking your head. Breaking new ground, Small tells the harrowing story of his childhood in graphic-novel form, and the result is a must-read you shouldn’t miss. His thoughtful illustrations reveal a hauntingly vulnerable little boy, a downright evil grandmother – and worse. Simple yet alarming, the text is sparse, allowing the black-and-white drawings to tell a strange story that takes place in a strange household where the unsaid prevails.

Father, an austere radiologist, works often and often late; Mom speaks in the alternating languages of deafening silence and slammed cupboard doors; one brother’s voice is heard through the banging of drums; and the young David’s voice gets lost in illness. And there are secrets – family skeletons, hidden desires and secrets no normal parent would keep.

It is two and a half years after the initial diagnosis that Small begins his battle with cancer at the age of 14. Even then, he is an unconscionably unwitting patient. His parents tell him he’s had a cyst, his thyroid gland and a vocal cord removed. Except for a scratchy little “Ack!” Small is unable to speak at all when he wakes up from surgery and barely above a whisper for the next ten years. In a recent interview, Small said he initially “took it as a punishment – sort of this, ‘We’ve been telling you for years to shut up. Now we’re going to make you shut up.'” (New York Times, September 6, 2009)

After secretly learning he’d actually had cancer, Small’s sleep is filled with nightmares, starkly but believably portrayed in the book. And on the same page he is shown being sent away to an all-boys school out east, he is shown being sent back – with the advice to seek psychiatric help. It is impossible to miss the futile despair in Small’s artful panels.  Upon returning home, his parents confront him:

With a snarl that leaps from the page, Small’s mother continues to perpetuate the lie. But the illustration of his father depicts a parent with a conscience, albeit a deep-seated one. The contrast is startling even though, upon turning the page, Small’s father “recovers” saying, “You didn’t need to know anything then, and you don’t need to know about it now…” as he rejoins forces with his wife.

Three quarters of the way through the book, noting the very date and time of his first psychiatric session, Small takes on his childhood – and his nightmares – in a new way. The remaining pages reveal the things that ultimately lead to an understanding of Small’s harrowing childhood – an understanding that attempts to forgive, but which readers may find hard to accept.

The graphic novel might seem an unusual form for memoir and in this case the story is certainly rich enough to stand on its own. In fact, the black-and-white-and-gray images, bleak Detroit setting and dark characters scream French film noir, not comic book. But David Small, an award-winning illustrator with a tragic history makes it work – very well. His brilliantly eerie illustrations and carefully selected economy of words will stay with you long after you turn the last page of Stitches, a Memoir.

4 thoughts on “Stitches, a memoir by David Small: A Must-Read”